Ahh, the logistics of air travel. The hire car had to be back by 5pm. Being of a nervous disposition I had it back by 4:15pm. Our flight home is 21:50. So five and a half hours to kill. Can't even go for a walk. Airports are not laid out for it, unless dodging across motorways with loaded suitcases is what you do for laughs.

No worries, I have this nice sofa and a free hour of internet courtesy of Swiss Air - Just so long as the laptop batteries hang in there. I brought dozens of cables for charging mobiles and laptops and satnavs... but I didn't bring the adapter plug. I thought about it. Then I forgot about it. So I have been rationing my ampage in a way that is reminiscent of Apollo 13.

It has been a good weekend. I've already blogged about CERN. Yesterday we went to Chamonix to walk in the Alps. Didn't walk much because it rained and the cloud ceiling was just above the rooftops of the houses, but it was nice to reminisce about the last time we were there, and we did get a bit of a wet walk, even though we'd only brought summer clothes.

Today we did the Jardin Botanique - mainly for Sarah, but I always enjoy a garden visit, too - and then we took a walk along the south bank of the lake. Very windy. Quite cold. A phone call home to wish our Dads a happy father's day revealed that in the far northern climes of frigid England the sun is cracking the flags and hitting 80F. C'est la vie.

You like the French? I've been determined to speak French this weekend. I so want to be able to converse. I thought I was doing okay last night in the Tutti Spaghetti at Archamps until my request for the bill brought a second cup of tea. Nice guy, though. Seemed thrilled to be able to practice some of his English on us. We were very polite, we smiled and nodded, but we couldn't tell which bits were French and which were English. I'm certain he had the same problems with our attempts in his language.

Two hours to go. Getting jumpy, now. There seem to be a lot of Easyjet cancellations on the PA. Not ours, though. Not yet. Don't want another night like Trevisio, although I've found myself spying out the best floor spot for a night on the lino. There's a nice corner behind Starbucks with radiators to keep us warm.

Okay. Two hours. Batteries fading fast. Time to join the shuffling masses into departures. Won't be any sofas there, I guess. Or free internet.

Geneva: The LHC in The City in the City

I've just been reading China Mieville's The City in the City. What a stunning book it is. The concept is so simple and believable and yet so strange all at the same time.

Right now I'm in Geneva, just outside the city on the French side, and I'm struck by the similarities between this city and that in Mieville's book. I'm a Brit driving a Swiss car staying in France. Every day we pass across the border only ten minutes from the hotel. Yesterday I paid for a car park in Euro's and the machine gave me change in Swiss Francs. For the locals it is all so normal, so... business-as-usual. The border crossing is the real deal where you can be stopped and grilled and searched, and there's one particular car lane that is so narrow and twisting you have to creep along in first gear, threading between vicious cones that look like they could do serious bodily harm to your shiny hire car, for which you have a scary 1500 euro damage excess because you are a cheapskate.

Don't want to sound negative, though, because I love Geneva. It is a real cosmopolitan city and it feels so comfortable. Yesterday we did the tourist stuff, you know, walking out to as near to the Jet d'Eau as possible without getting totally soaked, then the wind changes and you get totally soaked, and it's fun until you have to walk around town in wet clothes. It was sunny though, and I dried quickly enough.

In the afternoon, the real highlight for me: a tour of CERN. When I booked this, a month or so ago, I knew only that it was a tour, in English. No other details. What we got (for free) was a film show, a fascinating guided tour of Atlas (one of the four detectors on the Large Hadron Collider) and a 3D film presentation about the building of the LHC. Our tour guide was one of the physicists whose day job involves working with Atlas. He was knowledgeable (as you'd guess) and full of infectious enthusiasm for the project. The highlight, for me, was seeing the Atlas control room. Okay, it was a quiet day, there were no collisions scheduled, but two beams of protons were being circulated around the LHC to test the systems, (over 10,000 laps per second). Every now and again the detectors would pick up something that looked like a collision but was, in fact, just stray cosmic rays zapping through the detectors, but hey, it was exciting seeing all the displays light up every time it happened. CERN is impressive. Way impressive. There are statistics, numbers, bandied around during the presentation and they make the mind boggle.

I came to CERN with the mind-set that this was research; that a story would come. A story didn't come (not yet). Instead I spent the day in slack-jawed awe of the place. I bought a CERN T-shirt. The note book never came out of my bag. I was a tourist. Loved it. 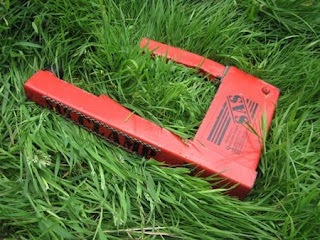 We're back in Hay-on-Wye for the annual literary festival. This is a fixed item on our calendar now and we make sure we get down here every year, even if it's only for the weekend.

This year the demands of the day job meant that we couldn't stay for the whole week, so we tried something different. Rather than make do with just the four days of the opening weekend, we left the caravan on the site and returned home mid-week. Then on Friday I finished early and we loaded fresh clothes, towels and food into the car and came back. It's about three hours to Hay. If the traffic is good we can sometimes shave fifteen minutes off that. We've tried different routes and we have now settled on the quickest option, both with and without the caravan. I'm rambling. The point is this: it's a long way, and doing it four times within a week had us wondering if this really was such a good idea.

So, yes, Friday night we arrived here at about eight-thirty in the evening. As we drove into the field I reached into my pocket for the caravan keys and...

You see, I have a routine. The last thing I do before we leave home is go inside and make sure the fridge is closed and switched over to car battery power. Then I lock it. And this time we didn't have the caravan. So the keys were in the key box at home.

Sarah had her's. She's better than me at remembering stuff. But although we could get inside the caravan she didn't have the key which unlocked the hardened steel, many-tumblered security wheel lock. That was on my keyring. The wheel lock would have to be removed before we could bring the caravan home on Sunday. So what do we do? At some time either today, Saturday or Sunday we faced a six-hour round trip home to get the key. If we do it on Friday we wouldn't be back until two or three AM and we were already tired. If we did it on Saturday we've wreck Saturday and would miss all of the four events we'd booked and paid for, and if we did it on Sunday we faced nine hours in the car and a whole day and half of anticipating the fun of it.

I checked my tool box. Screwdrivers, tyre lever, pliers, electrical tape... not the sort of kit that might be used tackle tempered machine steel. We'd have to go home. Tonight. Right away.

In a rage I gripped the hardened steel, saw-proof, drill-proof, angle-grinder-proof security clamp and tried to rip it off with my bare hands.

I wiggled it. It came loose. I took the tyre lever to it and within two minutes it was off and lying on the grass.

Now, once I'd recovered from the emotion of the event. Once I'd stopped cheering and running laps of honour around the field, a thought occurred to me. I am not a criminal. I have no experience in burglary and theft. It had taken me just two minutes to remove the foolproof anti-theft device. How long would it have taken a dedicated caravan thief? How comfortable would I now be in using this device to secure my pride and joy against the cream of criminal masterminds?

This is something I am going to have to think about.

Newer Posts Older Posts Home
Subscribe to: Posts (Atom)
I am a Caravanner. I travel in a box, or at least tow one behind me. I do most of my travelling on British roads, therefore I rant rather a lot.
Website: www.travellinginabox.com

My book, by the same name, is available on Amazon, for Kindle, or as a paperback. It recalls our eventful journey from canvas to tin. Click on the preview button above for a free sample.
In this blog, though, I'll tell it as it happens. Not all of it will take place in a box. Now and again I venture into hotels where I am an alien. Sometimes I sleep on airport floors.
I'm also a Science Fiction Author, but you won't find any of that stuff here. This is for box people.

Please consider signing up to my newsletter for information about book releases, special offers and more